skip to main | skip to sidebar

Argentina's government said consumer prices rose less than forecast in January, opening yet another chapter in the now year-long running dispute about the accuracy of the official data. Argentine consumer prices rose 0.9 percent in January from December and 8.2 percent from January 2007, according to data presented by the national statistics institute yesterday.

Inflation data from the institute, known as Indec, has been repeatedly questioned by independent economists, opposition leaders and an statistics office employees union since then-President Nestor Kirchner began changing personnel in January 2007 in an effort to "improve quality". Kirchner's wife, Cristina Fernandez de Kirchner, succeeded him on Dec. 10 promising to extend her husband's economic policies.

Estimates of true annual inflation range across the 15 to 20 percent region.

Wholesale prices rose 15 percent in January from a year earlier and 0.7 percent from the month before, Indec said.

Buenos Aires-based El Cronista newspaper reported yesterday that the International Monetary Fund has formally contacted Indec asking for clarification on how it measures inflation and on whether employees have been fired for protesting data manipulation.
Posted by Edward Hugh at 12:05 AM 3 comments:

Engery Problems and Solutions in Argentina

Recent energy discoveries in Argentina have highlighted long run potential, but at the same time underlined the vulnerability and weaknesses in the policy of the current administration. Pan American Energy, the second largest oil and gas producer in Argentina, recently announced the country’s biggest hydrocarbons discovery in recent years and a $1bn investment programme in the field which is near its existing Cerro Dragón one in the southern province of Chubut. The company estimate the field contains 100m barrels of oil equivalent.

Pan American Energy also said it was drilling a second well in the northern province of Salta, ”which, if successful, would confirm the existence of a very large gas deposit”, and was looking closely at gas prospects in Tierra del Fuego and offshore.

However discovery - whilst being the mother of invention - is still a long way from bringing new discoveries into production, and in the meantime the energy model championed by President Cristina Fernández and her husband, former President Néstor Kirchner - of keeping domestic energy prices and utilities tariffs artificially low to boost an economy recovering from a debt and devaluation crisis in 2001-2002 - looks increasingly unsustainable.

In the short term the policy has proved capable of "fuelling" economic growth rates of more than 8 per cent, but it has served as a serious disincentive to investment in new reserves, led to declining production and lay behind the major energy crisis which Argentina experienced last summer.

In the power sector insufficient extra capacity has been brought online to keep up with runaway demand fuelled by electricity rates that are about a quarter of international levels. Industrial clients have come under pressure to use less energy in order to avoid politically damaging power cuts for residents when temperatures peak.

In the fuel sector, it has meant shortages, despite refineries working at capacity, higher export tariffs designed to guarantee domestic supplies, and even a temporary ban on fuel exports.

Analysts estimate that some $3bn-$3.5bn a year investment in oil, gas and electricity is needed to keep the economy growing at 5 to 6 per cent. But national oil production hit its lowest level in 2005 since 1998, and gas production, which has been rising steadily, dropped off in 2005 compared with 2004, according to the latest official data.

Ms Fernández’s first month and a half in office has been marred by the spectre of regular power cuts or rationing that a timid energy saving plan she announced last month has failed to banish. And there is no indication yet when tariff rises expected to start this month will actually materialise, especially against a backdrop of mounting inflation.

This week the La Nación newspaper quoted data from Cammesa, the electricity wholesale market regulator, showing Argentina spent $4bn in the last four years subsidising electricity tariffs, buying fuel oil and diesel, and importing electricity from Uruguay and Brazil – enough to have built six 800MW power stations and to have had a net energy surplus this year. Cammesa had no comment on the figures.

Argentina is moving ahead on plans to build a pipeline costing $1.9bn to import 27.7m cubic metres of gas a day from Bolivia by 2010, but Bolivia needs more investment yet in its own energy sector to meet the ambitious goal.
Posted by Edward Hugh at 11:16 PM 8 comments:

Argentina reported a monthly budget deficit (excluding interest payments) in December for the first time in three years following an increase in social security spending and subsidized loans to small businesses. The primary budget deficit was 1.2billion pesos ($380 million) in December, down from a surplus of 1.9 billion pesos in November, the economy ministry said today in a statement in Buenos Aires. Argentina reported a surplus of 25.7 billion pesos for 2007, about 3.2 percent of gross domestic product.

Argentine President Cristina Fernandez de Kirchner has consistently argued that maintaining a budget surplus and a cheap peso has helped Argentina recover from a financial crisis in late 2001, when South America's second-largest economy defaulted on about $95 billion of bonds.
Posted by Edward Hugh at 1:41 AM No comments:

Well, make of it what you will is, I suppose, all you can say. Argentina released the latest data on the consumer prices index earlier this week, and according to the controversial Nacional Statistics and Census Office, Indec, retail price inflation was running at 0.9% in December, and at a year on year level for December of 8.5%. 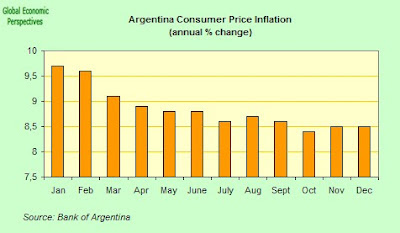 The CPI for Buenos Aires City and the metropolitan area shows that prices in 2007 rose less than in 2006 (9.8%), thus according to official statements inflation in Argentina is receding. But this is not a view many people outside the government are prepared to accept. The 8.5% figure is a long way from private economists estimates that inflation in 2007 was somewhere in the range between 17% (the optimists) and 22% (the more pessimistic).

Indec has been in the eye of the storm for months now, with the Kirchner administration sacking several technical staff responsible for the index for not “correctly” interpreting cost of living data, replacing them by more compliant personnel, who were less statistical experts and rather more “telephone extensions”, as the Buenos Aires press put it.

The Indec conflict has been ongoing with labor stoppages, official interventions, mutual threats and at the end of the day a general discrediting of the Argentine official statistics office.

One of the principal concerns of the Kirchner/Fernandez administration has been and is concerned that double inflation will have a significant impact on sovereign bonds liabilities, given their floating interest rates adjusted by economic growth and inflation.

To add to the scandal the regional Indec office in Mendoza province, which many consider apparently was doing a reasonable job, systematically calculated inflation as being higher than the official index, elaborated in the main office in Buenos Aires. But one of the first moves of the economic team of the Fernandez administration on taking office was to change all the staff at the Mendoza Indec office, and of course the inflation reading is now well aligned with the Buenos Aires data.

Make what you want of it, but the December index shows that compared to November, health and medical attention jumped 3.5%; leisure, 2.4%; other goods and services, 1.9%; clothing, 0.9%; housing and basic services, 0.8%; transport and communications, 0.7%; food and beverage, 0.4% and education, 0.2%. On the other hand home maintenance and equipment actually decreased 1.5%.

Wholesale prices in December increased 0.5% over November totaling 14.4% in the last twelve months and the construction index was up 0.7% in December. 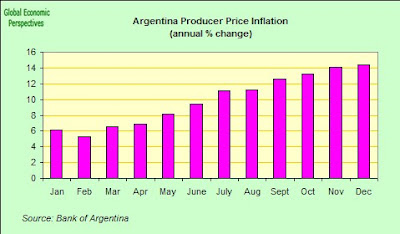 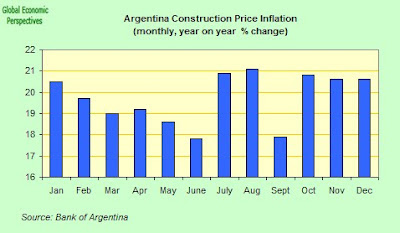 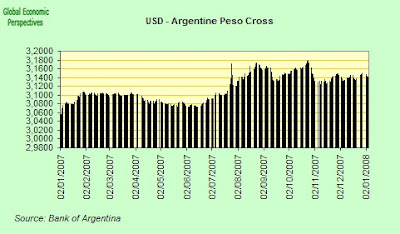 Posted by Edward Hugh at 2:01 PM No comments:

Well, a Merry Xmas and a Happy New Year to all my readers. Thank you for taking the time and trouble to pass-by. This blog will now - failing major and surprising new developments in the global economy - be offline till the end of the first week in January, or till after the festival of Los Reyes Magos in Spain (for those of you who know what this is all about). Come to think of it, maybe this is just what our ever hopeful central bankers are in need of even as I write - some surprise presents from the three wise men - but I fear that this year if these worthy gentlemen do somehow show at the next G7 meet, the star in the east which draws them will not be the one described in the traditional texts, but in all likelihood the rising star of India. 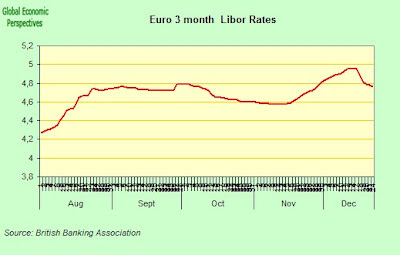 Credit crunch, did someone use the expression credit crunch?
Posted by Edward Hugh at 2:56 PM No comments:

``The expansion was higher than expected -- it was a surprise,'' said Mariano Tavelli, a portfolio manager at Tavelli & Compania, in an interview with Bloomberg television. ``This is related to higher loans for consumption, especially for home appliances and automobiles.''

The economy is heading to its fifth straight year of growth, helped by a currency devaluation in 2002 that strengthened industries, making local goods cheaper in international markets. A drop in unemployment levels to a 15- year low has helped boost consumer's purchasing power, increasing demand for goods.

Tavelli, who expects the economy to expand 9 percent this year, said growth may slow to 6 percent in 2008 as President Cristina Fernandez de Kirchner, who took office Dec. 10, seeks to slow public spending to strengthen the budget surplus.

The annual growth rate in October exceeded the 9 percent median estimate of nine economists surveyed by Bloomberg. It was the fastest pace of growth since May.
Posted by Edward Hugh at 1:08 AM 1 comment: 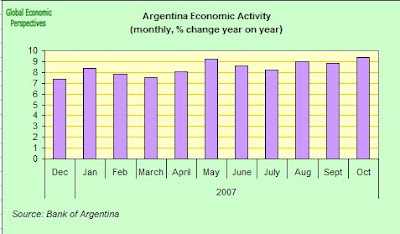 The economy is heading to its fifth straight year of growth, helped by a strong currency devaluation following the economic crisis in 2002. The impact of the currency correction has strengthened industries, making local goods cheaper in international markets. A drop in unemployment levels to a 15- year low has helped boost consumer's purchasing power, increasing demand for goods.
Posted by Edward Hugh at 12:38 PM 2 comments:

Edward 'the bonobo' is a Catalan macroeconomist and economic demographer of British extraction, now based in Barcelona. By inclination he is a macro economist, but his obsession with trying to understand the economic impact of demographic changes has often taken him far from home, off and away from the more tranquil and placid pastures of the dismal science, into the bracken and thicket of demography, anthropology, biology, sociology and systems theory. All of which has lead him to ask himself whether Thomas Wolfe was not in fact right when he asserted that the fact of the matter is "you can never go home again". He is currently working on a book with the provisional working title "Population, the Ultimate Non-renewable Resource". Apart from his participation in A Fistful of Euros, Edward also writes regularly for the demography blog Demography Matters. He also contributes to the Indian Economy blog .